Today (the 27th of December), Google is honouring Marlene Dietrich and her 116th birthday. In a word: she was iconic. In a couple: she was Madonna’s spiritual successor, with a knack for reinvention and a devil-may-care attitude that carried throughout her life.

She was a superstar of Hollwood’s Golden Era, with a 60-year career in film, radio, and cabaret. She’s also a medal-winning mar hero and an icon to gay kids.

In 1920s Berlin, Dietrich began her career as a chorus girl before eventually breaking into movies to become an unapologetic femme fatale and queer icon. This is her story. 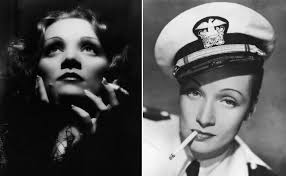 Dietrich’s start was in silent films, before she caught the attention of director Josef von Sternberg, who later became both her mentor and lover. Her first starring role came in Morocco in the 1930s, dressing in tuxedos and kissing a woman in a part that became typical of the personal and the professional.

Under von Sternberg’s tutelage, she appeared in a run of hits in Hollywood’s halcyon golden days, including The Scarlett Empress and Shanghai Express.

Dietrich was a study in duality (you could say she typifies the meme: ‘get you a girl who can do both’), as a combination of a sultry stage siren and androgynous liberation in slacks and blazers and ties.

By the start of World War II, Dietrich’s personal life had begun to cast a shadow on the professional as she was notorious for her love affairs with famous men and women, including John Wayne, George Bernard Shaw, Mercedes de Acosta, John F. Kennedy, and Marion Carstairs.

Affairs aside, she dedicated herself to bolstering the Allies by raising war bonds, going on extended USO tours, and participating in propaganda broadcasts slating Hitler and the Nazis.

In 1947, Dietrich was awarded the Presidential Medal of Freedom, which she considered her proudest moment. (Even more so than her turn in Morocco, for which she’d been nominated for an Oscar.)

In fact, in the early days of the war, Hitler had wanted Dietrich to be his mistress.

“I turned him down,” she said. “Maybe I should have gone to him. I might have saved the lives of six million Jews.”

The ’50s were quieter again, though Dietrich continued to work with directors like Hitchcock and Welles. Her only child had given birth and she was known as the “most glamorous grandmother” in the world. Indeed, she succeeded on one front: being cast in films while her one-time rival Greta Garbo faded into distant memory.

Film work dried up and Dietrich took to the stage for a four-year tour around the world. In the first part of her act, Dietrich would sing in gowns and in the latter, she’d take to tails and a top hat to sing “male” songs.

Her later years were blighted by deteriorating health, alongside issues with alcohol and painkillers. In 1973, Dietrich fell off the stage and required skin grafts and the following year, she fractured her leg – which forced her retirement.

Though Dietrich left behind a string of brilliant Hollywood flicks, her endearing memory is as a balls-to-the-wall icon.

While Dietrich’s professional image was carefully maintained, her personal life was a freewheel kept out of public view. Dietrich was bisexual and she quietly enjoyed the thriving gay scene of the golden era of Hollywood.

Indeed, she was renowned for her many affairs: some were short and others lasted decades. Often, they overlapped  and most were known to her husband. Her affairs were a tangled web of the who’s-who of the time: Dietrich was involved with John Gilbert, who’d been involved with Greta Garbo.

She was with Douglas Fairbanks Jr., who was married to Joan Crawford. Cuban-American writer, Mercedes de Acosta, was another conquest who also claimed to be Greta Garbo’s lover. In fact the LGBT scene was so prolific that Dietrich spawned the phrase ‘sewing circle’ to describe the underground, closet cases in Hollywood – which, tbh, sounds like the best thing ever.

Of all the women namechecked, Garbo’s is the most interesting. Greta Garbo was a screen siren at the time too, and Dietrich’s greatest rival and peer. Rumours of an affair have dogged the duo in the last two decades on the back of a book from Diana McLellan, The Girls: Sappho Goes to Hollywood

Garbo and Dietrich met in 1925 in Berlin and shared intimate friends, though they’re rumoured to have never spoken to or about each other. A reconciliation attempt was heralded by Orson Welles in the ’40s, when he presented the two women to each other at a dinner. Dietrich reportedly told Garbo how inspiring she was and referred to her as her undying muse.

Make of that what you will.

Follow us
Liked it? Take a second to support Outcast.ie on Patreon!